Over 100 ancient coffins unearthed in necropolis near Cairo 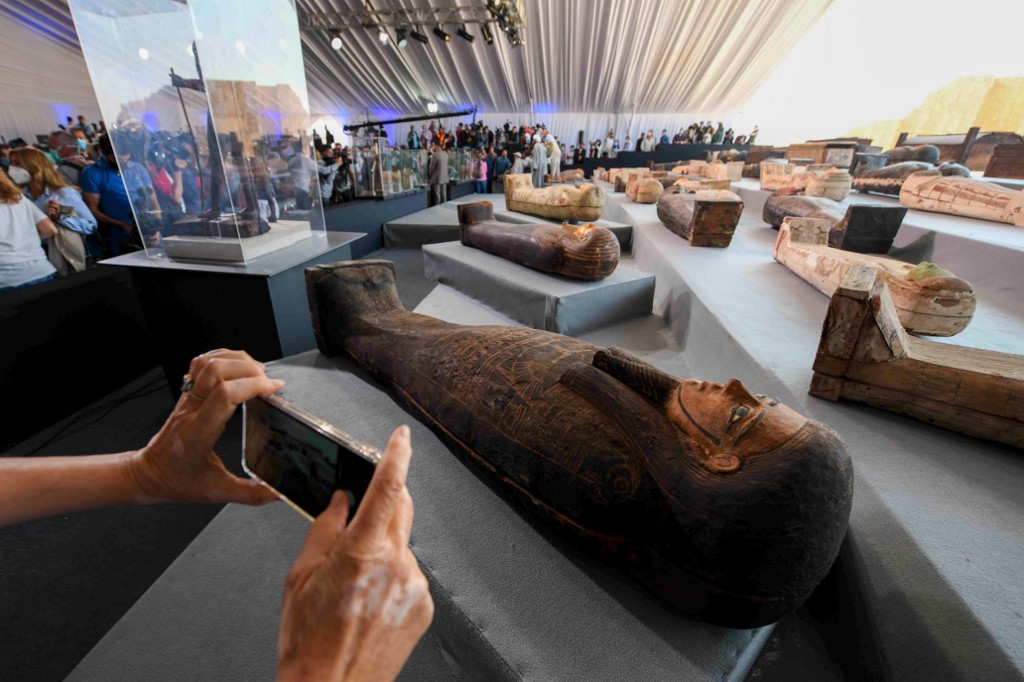 A picture shows wooden sarcophagi on display during the unveiling of an ancient treasure trove of more than a 100 intact sarcophagi, at the Saqqara necropolis 30 kms south of the Egyptian capital Cairo, on November 14, 2020. – Egypt announced the discovery of an ancient treasure trove of more than a 100 intact sarcophagi, the largest such find this year. The sealed wooden coffins, unveiled on site amid fanfare, belonged to top officials of the Late Period and the Ptolemaic period of ancient Egypt. They were found in three burial shafts at depths of 12 metres (40 feet) in the sweeping Saqqara necropolis south of Cairo. (Photo by Ahmed HASAN / AFP) Egypt on Saturday announced the unearthing of a cache of ancient coffins at a major necropolis near Cairo, the second such find in the same area this year. Tourism and Antiquities Minister Khaled al-Anani said Egyptian archaeologists had found over 100 sealed, intact human coffins and 40 funerary masks and statues in three shafts at the Saqqara necropolis near the famed pyramid of King Djoser. The coffins have been closed for over 2,500 years.

In October, Egypt announced the discovery of 59 well-preserved and colourfully decorated ancient coffins in the same area. “Saqqara has shown only 1 per cent of what it has. “If we continue our excavations, various human and animal tombs are expected to be found in it. It’s a very rich area ,The artefacts announced Saturday date back to ancient Egypt’s Late Period and the Ptolemaic era,” al-Anani said at a televised news conference at the site. According to al-Anani, the collection would be put on show at Egypt’s three main museums, including the Grand Egyptian Museum being built next to the Giza pyramids. Egypt has in recent years announced a string of archaeological discoveries in several parts of the nation in an attempt to revive its battered tourism industry, which is a main source of national income. Tourism has been hard hit since the 2011 uprising against long-time dictator Hosny Mubarak and the outbreak of the coronavirus pandemic. (dpa/NAN)